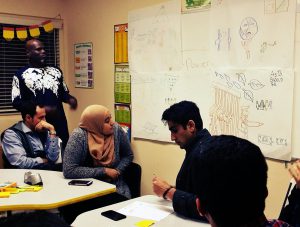 For the second time, IMAN organizers traveled to California to train Bayan Claremont students and leaders from Islah LA on the essentials of effective, transformative grassroots community organizing. An engaged group of over 40 leaders participated in the weekend-long training, which was hosted in South Central Los Angeles at Islah LA headquarters.

The training touched on all the hallmarks of IMAN’s organizing methodology, from the importance of understanding self-interest to the need for optimistic patience when working towards “the world as it should be.” As the nation transitioned into a new political moment, the group was able to process real-world issues during the training session and begin developing the types of genuine, relationship-based alliances that are necessary to withstand challenging times. The theme of the weekend aligned organically with IMAN’s larger #FightFearBuildPower campaign. 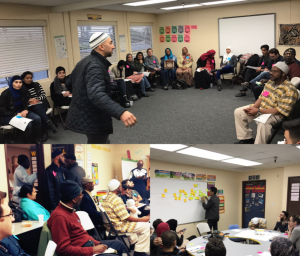 IMAN’s organizing work has long served as a model for grassroots organizers around the country to establish strong coalitions across boundaries of race, socioeconomic status and religion. Organizing trainings are also scheduled to take place in Chicago and Atlanta over the next few months. For those interested in participating in an IMAN training, please contact Organizing Director Shamar Hemphill for more information.