Cultivating a “deep bench” of up and coming leaders is among IMAN’s most impressive, and indeed necessary, accomplishments over the last 20 years. With a growing office in Atlanta and several staff members joining the team in Chicago, IMAN is primed to continue asserting itself as a nationally relevant model–one that many of you have helped to build. 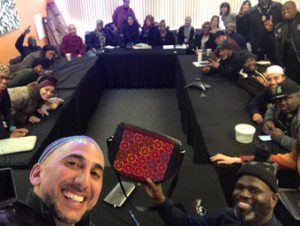 IMAN has added qualified, holistically minded professionals to its Health Center staff, positioning the department for greater expansion after earning FQHC Lookalike status. Director of Health Center Operations Sean Burke and interim Medical Director Muna Odeh have stepped into their leadership roles during this critical moment in the Center’s growth. At the grassroots level, new “Health Navigators” have circulated throughout the community, registering residents for Medicare and educating them about healthcare access.

As Green ReEntry continues to flourish, several talented instructors have come onboard to share their occupational knowledge and inspirational stories with their students in both Chicago and Atlanta’s cohorts. Curriculum and Job Development has also been formally added as a division of the program, deepening the engagement with cohort members as they transition into the workforce.

IMAN has bolstered its operations with additions to its Communications, Finance and Development departments as well, ensuring that all of IMAN’s initiatives have the infrastructure they need to thrive. Such growth would not be possible without the continued support of the individuals, families and organizations around the country who believe in IMAN’s mission. If you or someone you know is interested in joining IMAN’s growing staff family, check out our current openings here.