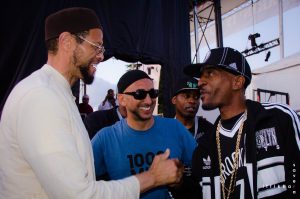 This year’s Takin’ It to the Streets festival gathered an extraordinary lineup of artists across genres and generations to provide the soundtrack for the continued Journey to Justice. First-time meetings, like that of Imam Zaid Shakir and hip-hop legend Rakim, highlighted the unique power of ‘Streets to forge bonds across differences based on a shared vision for more just, empowering community life.

The organic connection between art and activism was on full display in Marquette Park that day, as native Chicagoan and rising star Vic Mensa performed “16 Shots”, his high-energy commentary on the Laquan McDonald shooting, in the same police district where the teen was gunned down in 2014. Ms. Ilyasah Al-Shabazz, the daughter of Malcolm X, shared the stage with international pop star Yuna, rapper Brother Ali, and other talented artists and driven activists sharing their gifts and talents. 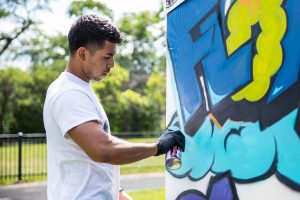 #Streets2016 was a profoundly inclusive space that represented a broad spectrum of people of all faiths, ethnicities and backgrounds. Thousands of attendees supported local businesses and artists inside the International Bazaar and at the Community Stage. Guests of all ages were inspired by the hip-hop elements and the youthful energy of the 1 LUV Family Pavilion, which included a graffiti battle highlighting the legacy of Muhammad Ali, a backpack giveaway, free haircuts and carnival rides.

Without the sweat equity of nearly 300 volunteers and the incredible commitment of the Steering Committee, #Streets2016 would not have been possible. While organizing a nationally recognized and celebrated festival, they also became deeply invested in the myriad of issues that marginalized communities face. 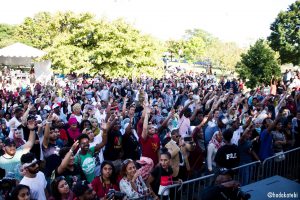 Thanks to the artists, activists, IMAN staff, leaders, volunteers and thousands of guests, Marquette Park’s legacy added a new chapter, reimagining the narrative of a community all too often associated with conflict, and demonstrating the transformative potential of Chicago, the nation and the world.