Miriam Arredondo is an IMAN youth leader who participated in the 2013 summer programming.  In addition to working on the Muslim Run Campaign, Arredondo has also been impacted by the organizing work being done around immigration reform. Here is a reflection by her about her experience in the youth summer programming: 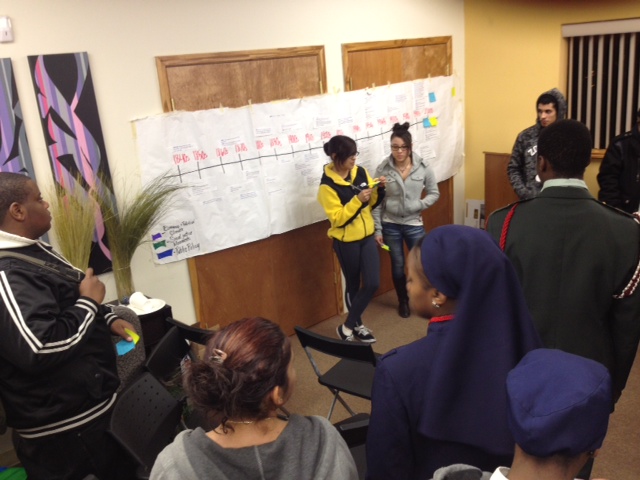 “The children are the future of a better tomorrow!” IMAN has focused on making sure that the youth are prepared to take on the future with knowledge, compassion, and healthy choices when it comes to eating. In order to do this, several years back many young people voluntarily attended meetings in order to find out how to make a difference in their community. It seems odd how little we know about what is so close. In neighborhoods all around Chicago, a nutritional phenomenon worse than famine takes place on a daily basis. A Food Desert, or an area where healthy food is nearly unobtainable, is what our community has become. It’s saddening to know that in our neighborhood, these “corner stores” that are a main source of food for many people ignore nutritional and fresh food.

The organization where I am a youth leader, IMAN (Inner City Muslim Action Network), has taken a stand, through Muslim Run: A Campaign for Health, Wellness and Healing, to help get rid of these Food Deserts for good. We learned that many of these “corner stores” are run by Arab Americans, most of whom are Muslim. Our organization’s number one goal is to hold these store owners responsible to the moral standings they claim. We want all the store owners to take an oath to provide these areas with healthy food instead of worse alternatives.

If we were to accomplish this, it would mean rebuilding a community from the ground up and above all it will help us fix the problems the system has caused. It could potentially help omit many racial differences between the communities and also help better eating habits that would potentially reduce obesity in our areas.

In order to make sure this is successful, there has to be a long-lasting policy that will continue for a long period of time and not just for a short while. In order to keep small, local businesses engaged and not allow large business to run over all them, one must first help these small businesses understand the mindset of the people we are trying to empower. In order to educate everyone, we have a campaign to help people make better decisions when it comes to eating.

Over the summer, I also took part in IMAN’s digital media class of roughly thirty youth members who contributed to getting the word out about the Muslim Run Campaign. Our number one goal was to launch a newsletter, but the class was also meant to teach us both journalism, and marketing and advertising, skills. We learned about business ethics and strategies from the numerous guest speakers we had. We also had the pleasure of meeting with local business owners who talked to us about several skills that would help us implement the Muslim Run Campaign.

Although most programs depend on the funding of generous people, we hope to keep IMAN’s summer youth program around for as long as possible. It keeps youth off the streets and lowers crime levels in our neighborhood. It helps youth gain knowledge and utilize skills they never even knew they had. If IMAN can do this much for our youth, I have complete assurance that with the help of many generous people we can reach our goals for the Muslim Run Campaign.