IMAN’s Youth & Arts Wellness Center is the most recent extension to its center, and it’s the planned location for an exciting range of new programming and services for the community. The partially rehabilitated building and accompanying parking lot is located directly across the street from IMAN’s current health and community center.  In addition to several important community dinners and events held there, the building has already launched a series of youth arts and social justice forums entitled Fresh Expressions, which will be held on the last Thursday of every month. The first Fresh Expressions was held on Thursday, March 30.  This month, a host of other youth programs will be launched or conducted out of the Youth & Arts Wellness Center. 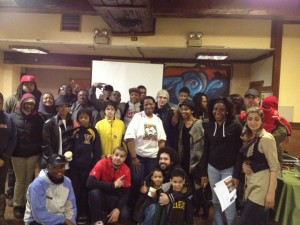 Speaking at a recent event held at the new center, IMAN’s Executive Director, Rami Nashashibi, said that “this building was secured through resources donated by a generous and pious man and we pray that by opening it to the public, it will become the seed of a much larger vision for community development that IMAN will publicly unveil later in the year.”  Stay tuned for exciting new programming being held around this space.  Meanwhile, if you’re in Chicago, save the date for the khutbah by Usama Canon on Friday, April 19, and for the post-khutbah activities centered that day on a Fresh Produce Stand.